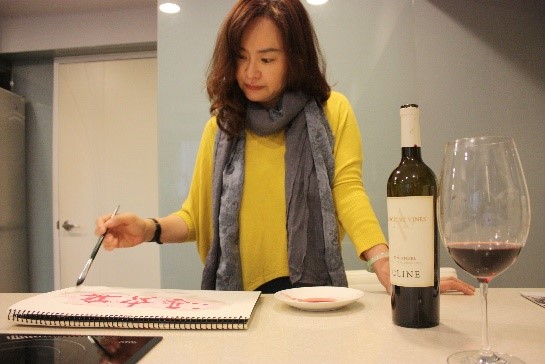 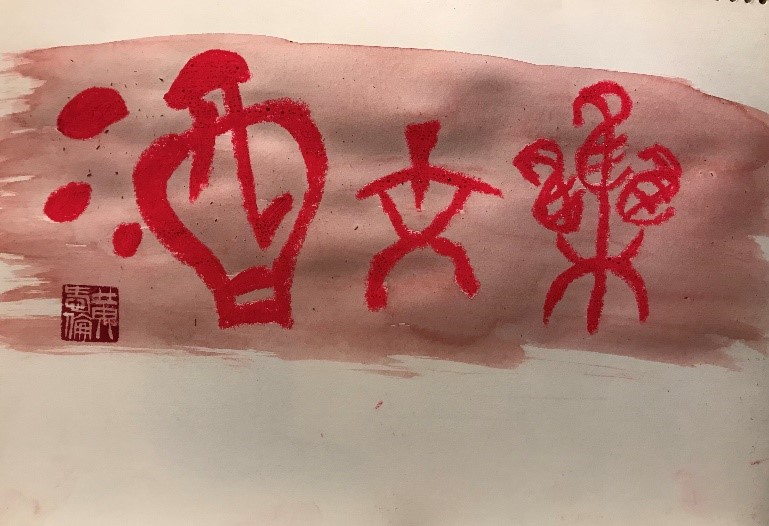 At the Intersection of Music & Calligraphy

This is the first time I am meeting Ellen Huang.  She is wearing an attractive mustard-colored sweater, paired with a patterned scarf, and comfortable blue slacks.  Her appearance is stylish but understated and classic, and her smile is warm and inviting.  Modestly, she states that her goal is not only to develop her art, but also find the principles and deeper meaning of any art in which she is involved.

Ellen’s first artistic love is the piano and she was formally trained at New York University (NYU) in New York City.  She performed piano recitals at the National Concert Hall in Taipei; in France (Paris, Chamonix, Chateau de Fontainebleu); in the USA (New York, Dallas, Los Angeles), and Shanghai.  Ellen appeared with her well-known husband, Concert Pianist Daming Zhu, on a recording of 4-hand piano pieces by the Taiwan composer, Lu Yen.  Ellen participated in the musical scores of two Taiwan movies. She was also the host of a radio music program.

Her second artistic interest lies in Chinese Calligraphy, and her talent was confirmed, when she was awarded the Gold Medal in an ROC Presidential Calligraphy Competition in 2017.  Her calligraphy has been exhibited in Shandung, Jiangsu, Jiangxi, Guangdung, and Taipei.

So the question is, “Why would Ellen Huang, a graduate of the Foreign Languages & Literature School at the National Taiwan University, devote herself to the field of the Arts?”

Ellen relates, “When I was growing-up, my parents were quite busy, so I was a bit lonely.  My mother suggested that learning the arts and reading are good ways for a child to spend her time.  In the neighborhood, there were two leading music teachers – pianist Madame Anna Fujita, and violinist conductor Chang-Guo Deng – whom started the Dung Fang Art School, where I studied piano.  I also studied watercolor painting from Chang Jie, and ballet from Liu Yur-Zhi.  Because I was never pressured to learn the arts, my enthusiasm was always high and I was a good student.  Also, as everyone knows, Chinese secondary school requires intensive studies and testing, so playing the piano was a good way for me to relax and ease the academic pressures of Chinese school.”

As long as you are enthusiastic, you can overcome difficulties

Ellen not only graduated from the Foreign Languages School at Taiwan University in English, but also she minored in French.  Periodically, there were performances of plays in her school. And she was usually the person who was in-charge of providing the musical scores for these plays.  After she graduated from Taiwan University, Ellen joined the music studio of Chang Hung-I, and was an assistant for music scoring for film.  After gaining adequate experience, she moved to Paris to further her piano studies at the Ecole Normale de Musique de Paris (Music Teachers’ School).  Again her primary focus was specifically on creating musical scores for film.  Following her studies in France, she was accepted to NYU in New York City, where she received her Master’s Degree in Music Education.

Ellen Huang remembers when she first arrived in the USA, she didn’t have a bed or any furniture – only a singular piano in her apartment.  When it was time for sleep, she reclined under the piano, but she was quite happy and thankful.  Ellen said, “When people are young, they have a lot of energy and passion!”  Ellen has a love for music and theater, therefore she felt that New York City was the ideal place her to be at that time, with opportunities to attend the Metropolitan Opera, Lincoln Center, and all of the theaters on Broadway, to mention a few.  Theater and concert tickets in New York City are generally quite expensive – usually not within the budget of university students.  However, there were “cheap” seats afforded to music students, located high-up in the loges of the theaters (far away from the stages), which Ellen took advantage of.  The positive aspect of these spaces was there were usually a small table and light, from which she could read the plays scripts.  Although the stage and actors were quite small from such a distance, the music was still excellent and moved Ellen.

Because Ellen’s love for music, she applied for a job at the Metropolitan Opera as an usher.  Not only did she earn a little money, but she could enjoy the daily performances.  When Ellen reminisces about her experiences of that time, she has a wistful smile on her face.

Upon being introduced to calligraphy in 2013, Ellen was surprised to discover that Chinese calligraphy has many things in common with Western Music

Ellen confirms that Western music and culture has had a great impact on her life.  However, she also states that the current Taiwan education also has many Western influences.  She also admits that her educational background in Western Music and foreign languages made her a “stranger” to Chinese culture and arts.  As she matured, Ellen desired to find her cultural “roots”.  She states, “Calligraphy is the most basic cultural aspect of Chinese culture.”  Training in calligraphy requires careful repetition, and an eye for what is considered to be the proper execution of a Chinese character.  However, Ellen also integrates her Western education into her interpretation of calligraphy, to create a new form of calligraphy for all to experience.

Ellen explains, “While ancient calligraphy is artistic on its own merits, art cannot be static.  I have employed my Western artistic influences in music and culture, to reinterpret Chinese calligraphy to make it more relevant and interesting to the present-day people.  Although music is an aural experience, while calligraphy is a visual experience, their commonality is in their required rhythm and tempo.”

Creativity is not limited to Art, but is also prevalent in Daily Life

Ellen states, “I enjoy cooking – my favorite dish to cook is the French chicken marinated in wine (Coq au Vin).

When I was living in Paris, I stayed in a dormitory which was run by Catholic nuns.  Meals were prepared for dorm residents.  Wine is more expensive than bottled water in France, so at meals, wine was served as our beverage.  From this experience, I began to enjoy tasting wine and different foods.  When I am tired or stressed, I enjoy cooking – particularly the process of cooking – and I like to be creative and experiment with the food ingredients and preparation.  Of course, there are times when my cooking experimentation is not that tasty or successful, however, members of my family are my “guinea pigs” and they are tasked with consuming my food creations.”

Upon discussing cooking, Ellen proceeds to enthusiastically explain the details of how to prepare Coq au Vin, which is a famous and popular dish in France.  While the ingredients are simple, the key is in the preparation.  Further, Ellen mentions that she enjoys cooking with wine.  She said, “Every time I prepare Coq au vin, the results are a bit different.  This is similar to Art in that it requires creativity each time.”

“The first part of my life in Taiwan was concerned mainly with diligently learning as much as I could – – a typical Taiwan student’s life.  However, it was only after living in the West (Paris and New York), that I realized that people need to relax at times, and Life is to be enjoyed and cherished.” Ellen remarks.

At that moment, Ellen decides to demonstrate her creativity in calligraphy using red ink, writing the words “Jiou Wen Ji” (da Vinci – alliterative in Chinese).  The “Jiou” is represented by a wine urn; “Wen” is represented by a slightly tipsy person, and “Ji” is represented by a gathering of birds nesting on a tree – the overall meaning is that wine is to be enjoyed with friends.  Then she decides to dip her brush into a small dish of 2016 Cline Ancient Vines Zinfandel, and then uses it to brush over the red characters, which causes the characters to “pop” out of their background, giving a please 3D effect – and integration of calligraphy and wine.

While, as an artist, it is important to be aware of current trends and interests, it is equally important to keep your identity and style, and not “sell out” to what is popular.

Ellen advises to young people who are interested in pursuing Art as a career, “Social media is a double-edged sword.  It is important to be able to use social media as a tool to quickly reach a large audience for commercial purposes, and to gain wide exposure.  However, artists need to be careful not to be influenced by the art of others, as you need to retain your own artistic identity and style.”

Finally, Ellen emphasizes, “If you are passionate about Art (or any other topic), it is alright to experience difficulties and hardships, as long as you keep yours Goals in mind.”

人物專訪：莊盛全 (From Physician to Entrepreneur)
Scroll to top